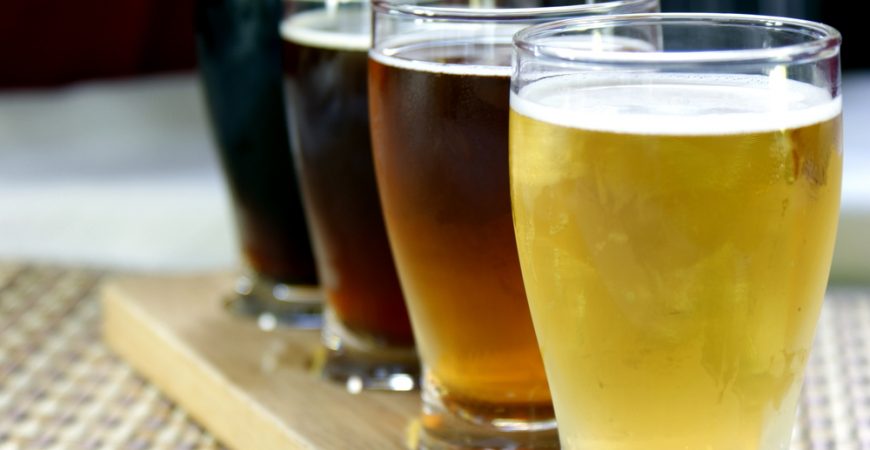 Sit down at a bar today and you’ll no likely have a large selection of unique beers to choose from. While popular brands such as Anheuser-Busch still dominate, plenty of options from smaller breweries are often available.

A “craft beer” is different from mass produced beer because it either comes from a small brewery that produces unique beers, or a larger company recently experimenting with small batches of unique flavors. The result is that you can expect a flavor different from a standard beer.

A Recent Beginning
It may feel like microbreweries have been around forever, but they came about just 80 years ago, in the 1960s. Before this, beer companies had been working towards creating a homogenized product that was the same everywhere.

Some of this was intentional, through automating the brewing process and using better distribution methods to expand how far a single brewery method could reach. Others were less intentional as smaller breweries were bought out by bigger ones.

Similar tasting beer may have had its advantages, like knowing what to expect from the six pack you just picked up, but it also had its drawbacks.

The same flavor of beer everywhere you went is—well—boring.
By 1965, beer drinkers were ready for a revolution. The larger companies had focused on creating a beer that appealed to the largest amount of people. This meant a very mild beer with a very specific range of taste.

Darker lagers and other beers that appealed to a more narrow taste didn’t exist. The first microbreweries appealed to these more unique tastes, and they thrived. It turns out the market was hungry for change, and as more people grew wealthy enough to pay premiums for a unique beer, that market grew.

The Revolution Continues
In 1985 there was just 37 microbreweries. Today, there are 8,764. This is a tribute to the success of craft beers, and the unique flavors they provide. Craft beers now hold 11.7% of the market, which may seem like a small amount, but represented 322 million 2.25-gallon cases.
Many larger companies have noticed the threat microbreweries mean to their business, and have either opened their own small sub-companies to offer unique beers, or bought microbreweries to add to their own lines. This continued well up into 2019, when the pandemic made stark changes to the industry.

Although craft beers saw overall losses during the pandemic, there is still room for growth in this market. The trends are down due to bars being forced to close or admit fewer people, rather than due to lack of interest from consumers.

It’s unlikely we will ever see a day where craft beers are a thing of the past, thanks to the sheer number of consumers who know and appreciate a good craft beer.

The next time you sit down to a specialty beer at your local bar, take a moment to appreciate that unique flavor. It wasn’t all that long ago that specialty beers were difficult to find or even non-existant. It’s thanks to pubs that cater to the unique desires of their customers that we can enjoy a bitter lagger instead of the same, ordinary foam.