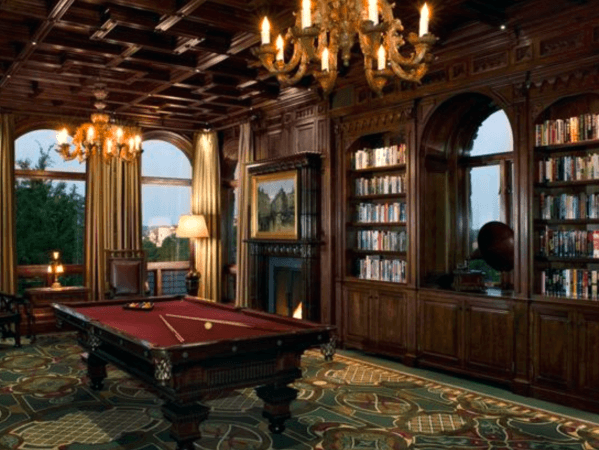 Pool has long been a favorite game played around the globe, with everyone from the President on down enjoying a game of it every now and then. It has been played as far back as the 1600s, with a mention of it appearing in a Shakespeare play.

The original game was played outdoors in a game similar to croquet, but eventually moved indoors to become a little bit more like the game we know today. The game was played on a wooden table, but rather than having rails the table simply had low walls to keep the ball on the table. The new indoor table also had green cloth on the interior to mimic grass.

Although the game was now indoors, it still wasn’t quite the game we know today. Players used a stick with a large, mallet like head on the end and rammed the ball with it. When the ball got too close to a wall, it made the game very difficult to play.

To fix this, players would turn the mallet around and use the thin, narrow tail of the stick—also called the queue. As you might imagine, eventually the pool stick used began to simply be the tail instead, and was named after the back end of the stick, or the queue.

Steady improvements continued from there. Eventually someone figured out that if chalk was applied to the end of the stick, it increased friction between the ball and the queue and made it easier to aim. A leather tip was also eventually added to the queue so that the ball could be spun as well as simply shot in a specific direction.

How the name ‘Pool’ arrived
One of the most common locations for a pool table was in the pool room at horse racing tracks. Owners of these tracks wanted to give their customers something to do between races, and a game of pool fit in with the gambling theme of the tracks.

Pool rooms at tracks were called so because of collective bets on horse races, also called “Pools.”

Women and pool
Women have played pool since its inception, but they had a more difficult road than their male counterparts. Pool rooms were often geared towards men, and women were frowned upon. If a woman wanted to play, she was virtually on her own—no man wanted to encourage her habit of playing.
Despite this discouraging tone, women have played and continue to do so. Today, pool is popular enough with women that they even have their own organization. Women like Emily Duddy, “The Billiard Bombshell” have been working hard to change how people view women when it comes down to pool.

The history of pool is a fascinating one, and deserving of our attention. Thanks to the passionate work of centuries of players, the game of pool has grown into the sport it is today. It is a much loved game that both men and women enjoy, and will continue to enjoy and improve on.